I have registered the domain name and started a companion website for the film at http://www.salemwitchtales.com. It is barebones at this point with minimal content and even less style, but I wanted to get it up soon so that I could use it to solicite help on the film, and already I’ve had a generous donation to help with the animation paper. I have a page with various early drawings from the first bits I’d done of the horse-fart scene that I’ll sign and send to people in exchange for a donation, but mostly, I have a PayPal button, which I can’t for the life of me figure out how to make show up here on WordPress, even using the HTML editor, so now I can send folks to the support page at: http://www.salemwitchtales.com/support.

I haven’t been able to get time to work with Ryan yet about the music, unfortunately, but I have an idea to make a dummy “score” with GarageBand, so that I can set the basic tempo and duration for each scene, and then see what he might be able to do for me within those constraints. I really liked some of the things I saw happening with his track “Germany” when I ran parts of it with the first animatic. 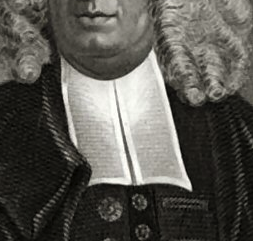 Neck cloth, from a portrait of Cotton Mather

I’ve been working on designing the additional characters needed for the film, and have decided that Mary Cummings – the wife of Deacon Isaac, mother of Isaac Jr. and sister of Tom – will be based on Tom, with a long vertical head, and that Isaac Jr. will have a wide horizontal head like the Deacon, only he will be shorter and have hair on the top of his head.  For Elizabeth How, I’m making her very round – not just her face, but her whole body is rounded and pleasantly chubby. The women will probably both wear scarves over their heads. The two ministers – who will show up briefly at the beginning and near the end – will likely be defined more by their clothing, and won’t really be too distinguishable from one another.  Several of the period portraits of ministers that I’ve collected have distinctive rectangular shirt-fronts, like this one from a portrait of Cotton Mather. Other period portraits of men have them wearing light-colored neck scarves, tied at the throat.  I don’t want to get too detailed about the clothing, but when something is easily rendered and makes the character distinguishable, I will try to use it.

My efforts this week include trying to get the animatic to reflect the actual time that the film will take. I’m hoping for it to come in under three minutes, but we shall see! I am still conflicted about whether to have a narrator or not.  If I do, there should be some tension between what the narrator is saying, and what action is being played out, and I’m not sure if that’s something I want to do or not, so since the music is not going to be a major part of this animatic, I may just record myself telling the story and try layering that onto the animatic to see how a narrator might work with it.

This entry was posted in Support, Technology. Bookmark the permalink.